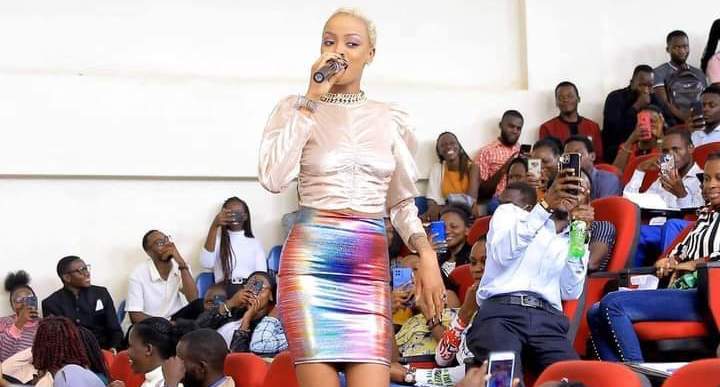 Nina Roz, who had been invited to interact with the students and talk to them about personal fears and drugs, at an event dubbed ‘Embracing the Inclusiveness Of The Boy Child’, summed up the day with an ecstatic performance.

“Humbled and grateful MUBS for choosing me to talk about our fears, drugs and entertain you,” Nina Roz posted on social media shortly after her performance.

After taking them through her battle with drugs and how she overcame addiction, Nina Roz treated students to some of her great jams like ‘Enyonta,’ ‘Billboard Kipande’, ‘Wangi’, ‘Tukimala’, among others

However, Nina Roz drove the students into a wild frenzy the moment she started performing her latest jam  ‘Bajooga’, which is currently one of the most famous club  bangers in Uganda.

Nina Roz has been making headlines ever since she released ‘Bajooga’, a song that is dominating airwaves across the globe.

Released barely a week ago, ‘Bajooga’ is being extensively streamed, currently standing at over 35K YouTube views and still counting.

There is no reason why you shouldn’t click the link to stream ‘Bajooga’ on YouTube, because only then will you know why Nina Roz mashed up MUBS when she performed the song.