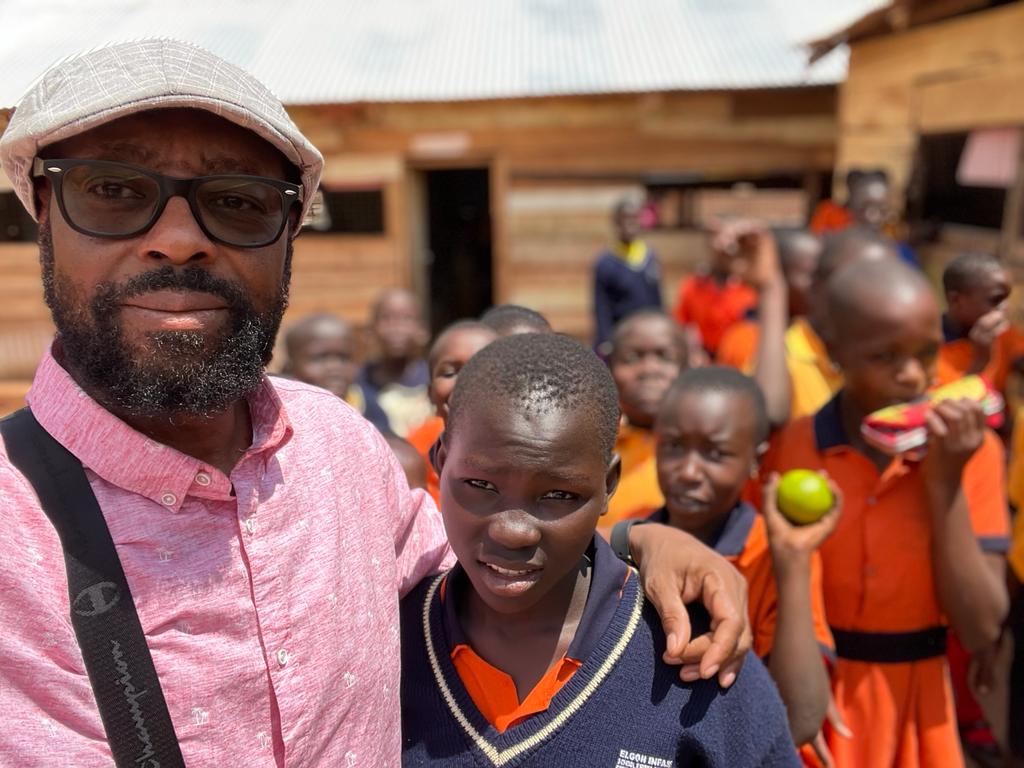 The story of the Biblical Good Samaritan who helped a wounded stranger he found along the roadside has come to pass with Cedric Singleton, the Chief Executive Officer (CEO) Black Market Records.

As a way of expressing his generosity and parental love, Singleton adopted a teenage refugee girl in Uganda, for whom he pays schools fees and provides other needs.

The beneficiary, identified as Evelyn Poni, aged 13 years old, is a pupil at Elgon Infant School in Kireka, Banda B1 Zone.

Evelyn lives with her single mother Annet Juan at a rented room in Kireka, Banda B1 zone and brothers.

She tells a sad story of how her father, Allison Mamba,  who was a soldier in the South Sudanese army, died several years ago, leaving her mother pregnant.

Juan says her husband Mamba was abducted in the early 2000s when war broke out in South Sudan and since then she and the children have never seen him.

They presume he was murdered because since then they have never seen him and don’t know whether he is dead or alive.

With sadness in her voice, Juan says Evelyn has never seen her father because at the time of his abduction she was not yet born.

Not even her elder brother recalls how their father looked like because by the time of his abduction they he was still very young.

After his abduction, Juan had no option but to raise her children at Bweyale Refugee Camp in Kiryandongo District, from where they hustled to come to Kampala.

Then, one evening as Singleton was walking around in Bugolobi, Kampala, he bumped into Evelyn along the road, selling corn, locally known as maize.

The poor, scrawny girl attempted to sell maize to him but he refused and walked on, not minding her.

However, instead of walking away to look  for other customers, the girl followed and insisted on selling him some maize, saying; ‘Uncle, uncle, please buy some…”

Singleton was touched by her determination and resilience, so he stopped a moment, and asked her why she was vending maize instead of being at school like other girls her age.

It was then that Evelyn narrated her ordeal  to Singleton, who thereafter bought some maize and then invited her to Black Market Records offices, such that she could  take him to her mother’s place the next day, which she did.

He later met  Evelyn’s mother Juan at her mud and wattle rented room in Kireka, Banda B1 Zone, on the big ghettos in Uganda, who told him her very sad story, narrating how she was struggling to raise her children as a single mother who didn’t even know what had happened to her husband.

On hearing Juan’s very touching story, Singleton decided to adopt her daughter Evelyn and raise her as if she were his biological child.

He also promised to provide financial support for her mother (Juan) to start up a small business from which to earn some income to support herself and the family.

Currently, Evelyn lives with her mother in Banda B Zone, Kireka, where Singleton not only pays her school fees but also provides scholastic materials, plus money for food, clothes and medical bills.

True to his big heart, Singleton promised to cater for Evelyn’s educational needs until she completes her studies and graduates from a university of her choice.

Besides Evelyn however, Singleton also pays school fees for other Ugandan teens from poor families, among them teenage performing group the Zari Dancers Africa, which is consists of 12 teenagers.